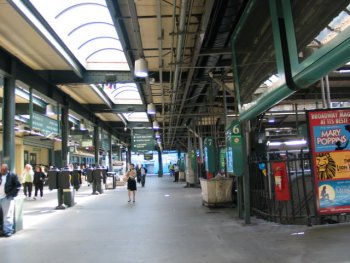 In February 2007, New Jersey Transit celebrated the 100th Anniversary of its Beaux-Arts style Rail and Ferry Terminal, designed by famed architect Kenneth Murchison.  This classic structure, known as the Erie-Lackawanna Railroad Terminal was added to both the New Jersey Register of Historic Places and the National Register of Historic Places in 1973.  Restoration work started in 1996 and is expected to continue through 2008.

New Jersey Transit’s historic Hoboken Terminal on the Hudson River waterfront is a major transportation hub.  Each weekday, about 70,000 people pass through the facility which connects New Jersey Transit commuter trains with the ferries, PATH trains and the Hudson-Bergen Light Rail system.

The terminal has been undergoing extensive renovations.  At the beginning, the challenge was where to temporarily house commuting passengers who wait for trains into New York City.
The concrete and steel carport pictured above was a likely location but the steel girder / cross member support work was heavily corroded with rust and contained peeling, flaking, chipping Lead-Based Paint. A solution was needed that could quickly address the corrosion and lead and create an environmentally safe space for thousands of daily commuters.

GLOBAL Encasement, Inc. was able to offer a simple, safe solution with a LeadLock™ Encasement System. The space was made environmentally safe in three days and at a fraction of the cost of removal, disposal and recoating which would’ve taken 30 to 45 days.
NJ Transit officials were pleased with the quick turnaround time and the beautiful and highly abuse and impact resistant finish of the custom designed system. The rust was addressed with R.I.P.™ Rust-Inhibiting Primer, followed with PrepLESS Primer™ and topped with custom tinted LeadLock™ TopCoat.